“How do you reconcile your training as a French chef with your plant-based diet?”

I was recently asked, “how do you reconcile your training as a French chef with your plant-based diet?” I responded that the skills learned in French cooking school translate to most other cuisines–you just need to learn to work with a few new ingredients when you no longer have butter and cream at your disposal.

This is easy to say, but here is a delicious example of how to reimagine a classic, French potato leek soup, called vichyssoise, using only non-dairy ingredients! I have to say that I was shocked by how good this turned out and am kicking myself for waiting 15 years to try making this without dairy. This recipe has earned its place in my winter recipe rotation. The added bonus of making it dairy-free is that this version is also cholesterol-free. (For those of you who want to keep the dairy, I left options for this in the recipe.)

Leeks: how to find and prep them for cooking

The inspiration for this came, as it often does, from my local farmer’s market. I spotted some beautiful, baby leeks (for $1 per bunch) sitting next to an assortment of freshly dug potatoes. For leek novices, here is a picture of regular-sized leeks. You’ll notice that unlike onions, the dark green leaves are flat, not hollow. Any type of leek works in this recipe. I used baby leeks, which look like scallions but with flat green leaves rather than hollow green leaves.

Leeks–make sure to use only the white and light green part for cooking. Save the dark green portion for stock. Previous Post: « Red Lentil Vegetable Soup with Fried Scallions
Next Post: The Best Ways to Cut Back on Salt »

Welcome to the CIM community! Check your email to confirm your subscription and be on the lookout for new content coming your way. 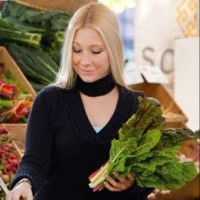 Another amazing quarter! The students in the Stanf

Cheesy plant 🌱 based fondue is a total hit with

Made in a cooking class with my patients today: Ch

Mise en place for chana masala with my patients to

Ready to record a bite-sized chat on the WHAT, WHY The Best Ways to Cut Back on Salt